ASUS has proven to be a great vendor when it comes down to manufacturing high-quality components. They have launched their new motherboard ROG Crosshair VII HERO (Wi-Fi) which is based upon the X470 chipset which supports the new generation of Ryzen processors. The new HERO VII offers a great deal of control over CPU overclocking as well as memory OC. On top of that, the UEFI is quite easy to get the hang of even if you’ve never had the opportunity to mess with frequencies, voltage, multipliers, and more. 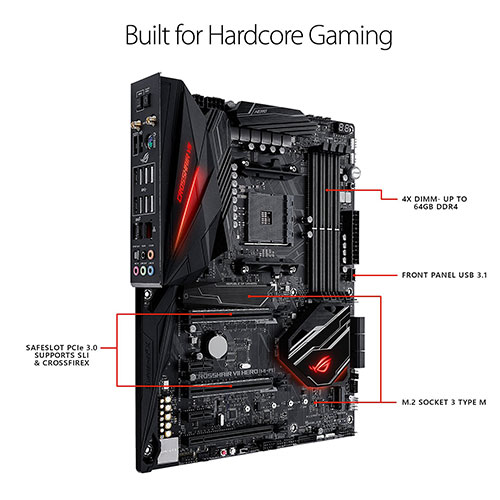 This board follows the standard ATX form factor and comes with more than enough features for you to play with, especially if you’re interested in heavy overclocking. For example, both graphics slots have metal shielding which is far from being just a gimmick. Oddly enough, the third PCI-E slot doesn’t feature a metal shield for whatever reason. 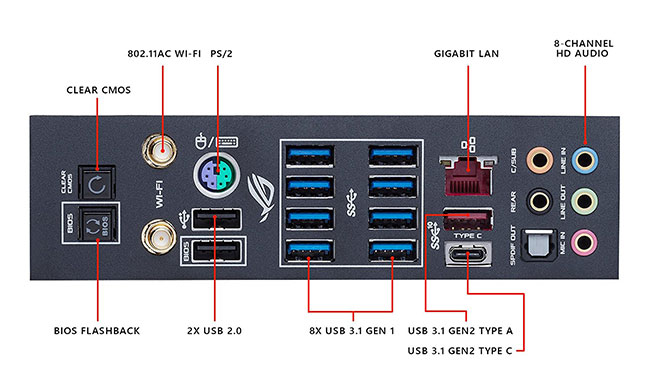 Furthermore, it includes all the perks and features of the X470 chipset with two M2 slots, USB 3.1 ports, special noise-reduction capacitors, S/PDIF out port, two WI-FI antennas, and a PS/2 combo port. The IO is packed with useful ports, and it comes with an included backplate cover!

The UEFI interface is one of the main reasons why this motherboard can be regarded as user-friendly. Unlike some other models that have overly-complex BIOS interface, this particular one is simple, easy to use, and it goes beyond the traditional keyboard-only controls. In fact, one can get all the information they need inside the UEFI as well as tweak whatever they consider is necessary.

The biggest advantage of this high-end motherboard is the simplicity that comes with it. In other words, it opens a whole new realm of possibilities for people who aren’t comfortable with overclocking, changing the voltage, and tweaking memory timings. On the other hand, while it’s generally quite user-friendly, it also packs quite a bit of potential for hard-core overclockers who love messing with high-end hardware without being worried too much about potential damage.

As far as the shortcomings go, there aren’t many. The only thing that might lower this model’s value is the fact that X470 chipset isn’t that much different from its older brother X370. More or less, if you’re not an avid enthusiast, the X370 chipset should offer more than enough options.

from Cable Tech Talk https://ift.tt/2JPyAI7
via IFTTT
Posted by Tara Smith at 8:08 AM